What are nightshade vegetables?

Nightshades are a family of plants that are typically considered poisonous. However, there are several popular garden vegetables from the nightshade family. Nightshade vegetables include potatoes, tomatoes, eggplants, and peppers.

Nightshade vegetables produce healthy and safe fruits, but their foliage and other plant parts contain high concentrations of solanine and are toxic to humans and many animals.

Can I eat potato leaves?

Potato plants produce a steroidal alkaloid called solanine. This toxic alkaloid is present in high concentrations in the leaves of potatoes. Solanine works as a natural pesticide for the plant to prevent insects from devouring it.

However, high levels of solanine are toxic to both humans and livestock. The leaves of potato plants contain high amounts of solanine and are not edible. Eating potato leaves can cause solanine poisoning, also called solanine toxicity.

Would I become sick if I ate potato leaves?

Children as more susceptible to poisoning (and more likely to try a bite of a potato leaf). Call a medical professional if you suspect your little one has eaten potato leaves and is showing signs of distress.

Are potato leaves toxic to pets?

Potato leaves are toxic to both cats and dogs. Make sure to dispose of the foliage away from areas where your pets may accidentally take a bite. Because of their small size, your cat or dog can get sick from relatively small amounts of potato leaves. Call your local vet for advice if your cat or dog eats potato leaves.

Which parts of the potato plant contain solanine?

Healthy potato tubers also contain solanine, but the concentration of solanine is so low that it does not cause any harmful effects. Immature potatoes contain more solanine than mature potatoes do.

The average potato contains 0.075 mg of solanine, says Wikipedia. To consume a toxic dose of solanine from eating healthy potatoes, the average adult (150 pounds) would need to consume 136 to 340 mg of potatoes. That amounts to 1,813 to 4,533 potatoes in a day.

The risk of solanine toxicity from eating healthy potatoes is not a concern.

The only part of a potato plant that is safe to eat is the underground tuber. Tubers do not contain a lot of solanine (unless they have turned green from exposure to the sun). To keep the underground tubers covered and protected from the sun, it is vital to hill your potatoes well.

If your stored potatoes have sprouted, the sprouts must be removed before eating the potato. If the potato is soft and mushy with large sprouts, it is best to throw it away. Likewise, if your potatoes have a small patch of green on the surface, it can be trimmed away before cooking. If the flesh under the skin looks green, toss the potato.

Can you eat potatoes that have turned green?

Potato tubers turn green when they are exposed to light. The green coloring is from chlorophyll. Although the chlorophyll won’t hurt you, its presence indicates that it also has high concentrations of solanine.

You shouldn’t eat green potatoes because they pose a greater toxicity risk. However, it may not be as great as many people assume.

Can you eat immature potatoes?

Immature potatoes are often marketed as baby or gourmet potatoes in the supermarket. They are served with roasts and poultry in upscale restaurants, too.

Can I eat potato leaves raw or cooked?

Cooking does not affect the amount of solanine in the leaves and does not lessen its toxic effects. Cooking the leaves of potato tubers that have turned green from sun exposure does not make them safe to eat. You cannot eat either raw or cooked potato leaves.

Potato leaves perform photosynthesis for the plant to make the energy needed to grow large tubers. They are not meant to be a food source for humans.

Can sweet potato leaves be eaten?

Can you get solanine poisoning from handling potato leaves?

Although potato foliage and stems contain solanine and can cause solanine poisoning if consumed, handling the foliage does not pose a risk to you or your pets. Potato foliage can be safely added to the compost bin after harvesting the potatoes.

Potato leaves, green (or sunburned) potatoes, and the shoots and buds of potato plants contain high amounts of solanine, the toxic alkaloid in potatoes. Consuming them can cause poisoning in humans, livestock, and household pets. Healthy potato tubers contain solanine, too, but the level of solanine in the tubers is too low to be of concern.

Potato leaves should never be eaten, in fact, any part of a potato plant that is green should never be eaten – including sunburned potatoes. The green parts of the potato plant are high in a toxin called solanine which will make humans and pets sick. The good news is someone would need to eat an extreme amount of green potato plant to cause serious trouble – thankfully the bad taste from one bite will usually make someone stop eating it instantly. 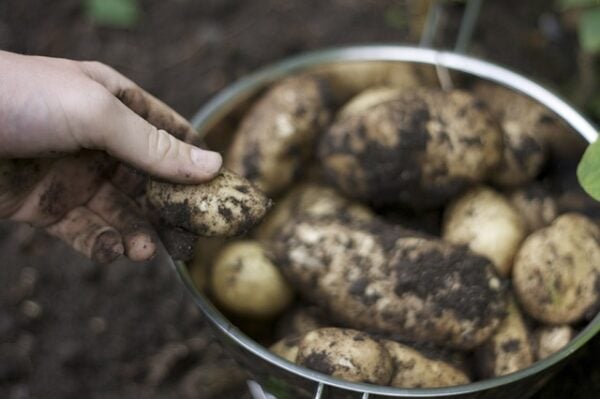