The spin digger or spinner was the first mechanised attempt at removing potatoes from the soil in which they grew to make gathering the potatoes easier. Prior to the invention of the spin digger, someone had to manually dig the soil and potatoes with a spade or a fork and spread the crop on the soil before the potatoes could be gathered. This was heavy, laborious work, which also meant it took a lot of people a long time to complete the potato harvest.

When was the potato spin digger invented?

The first potato spin digger was a trailed machine that ran on two large iron wheels and was pulled by one or two horses. It would later be pulled by tractors fitted with a drawbar such as the Fordson model N. This first potato spinner was invented by a county Antrim (Northern Ireland) man called John Hanson in 1852 from the village of Doagh. Many years later with the arrival of the Ferguson System 3-point linkage, a newer non-trailed/ mounted version of the spin digger emerged from a number of different manufacturers which could be fitted directly to the 3-point linkage of the tractor.

How does a spin digger work?

All potato spin diggers work essentially in the same manner. The spin digger consists of a vertical wheel with digging fingers/forks that spin around at 90 degrees to the potato drill/ row scattering the soil and potatoes apart onto the flat dug ground. This makes gathering the potatoes much easier and faster.

The gatherers would then be expected to kick through the soil as they moved along their section so no potatoes would be left behind. The problem of achieving a consistent depth was reduced when the potato spinner was mounted on a three-point linkage of the tractor as the operator can easily adjust the depth at their fingertips.

The tractor-mounted spin digger was also powered by a Powered Take Off (PTO), this meant the tractor operator could set the speed of the spin digger separately to the forward speed which the trailed spinners could not do. This was useful if you wanted to scatter the potatoes a little further or a shorter distance across the gathering section.

Potato spin diggers were used by potato growers to harvest potatoes from 1855 and some are still in use today. Growers of larger areas were still using spin diggers until the 1970s when the elevator digger was introduced and potato harvesters began to become more widely used.

The elevator digger consisted of an elevator of bars which the soil and potatoes traveled over, the soil passed through the bars and a neat row of clean potatoes fell out the back of the machine which was even more convenient for the gathers to collect as they weren’t scattered across a large distance.

The first single-row potato harvesters emerged in the 1950s – almost 100 years after the spin digger was unveiled. The spin digger was released by many different manufacturers all with individual tweaks and trademarks, but the design remained unchanged.

How did potato growers use spin diggers?

To harvest a field of potatoes with a spin digger the grower would begin at one side of the field and dig one drill at a time until the full field was gathered. The grower would assess how long the drill was from one end of the field to the other and arrange for a defined number of gatherers to come and work.

Each gatherer was given a section of the drill which they would gather along until they reached the next gatherers plot. Usually, the spin digger was operated by the grower or the grower would be busy keeping the whole thing running – they normally would not have time to gather.

It made more sense to have more gatherers working a shorter section of the drill rather than having fewer gathers with very long sections to gather. Constant bending over and gathering potatoes all day is very tiring. Not all gatherers would be given the same length of a plot- younger gatherers or less efficient gathers would be given a shorter plot than a fit energetic gatherer.

Although this may sound unfair to the weaker gatherer ( you were paid in relation to the number of potatoes you gathered that day) the objective was that all gatherers would finish their section at the same time – otherwise, this would delay the next drill being dug, which made the grower and the people who had finished impatient. The allocation of your section could be cut shorter by the person in front of you or behind you if you didn’t finish in time.

Spin diggers in use today

Spin diggers are not used by potato growers with large areas to harvest anymore. These large areas of potatoes are harvested by self-propelled or trailed two-row harvesters. Although, this doesn’t mean spin diggers are extinct. Smallholders or growers with a small plot of potatoes will still appreciate having a spin digger to harvest their potatoes. They are small, easy to maintain, and very reliable. The spin digger is a great piece of engineering design and will continue to be used by potato growers for many years to come. 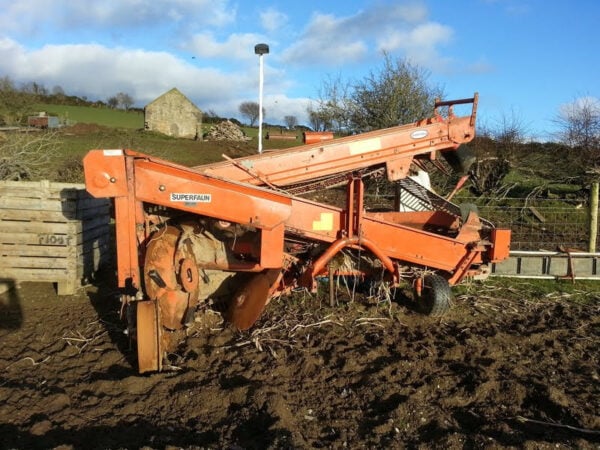